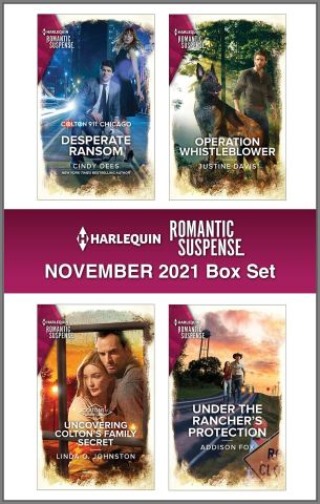 Cindy Dees: Raised on a horse farm in Michigan, Cindy Dees dropped out of high school at 15 to attend the University of Michigan where she earned a B.A. in Russian and East European Studies. She became a U.S. Air Force Pilot, worked at the White House, and was a part-time spy during her military career. Her first novel was published in 2002, and she has published over forty more since then with HRS and HQN. She is a 5-time RITA finalist and 2-time RITA winner and has won numerous other awards.|||Linda O. Johnston loves to write. While honing her writing skills, she worked in advertising and public relations, then became a lawyer…and enjoyed writing contracts. Linda’s first published fiction appeared in Ellery Queen’s Mystery Magazine and won a Robert L. Fish Memorial Award for Best First Mystery Short Story of the Year. Linda now spends most of her time creating memorable tales of romantic suspense, paranormal romance and mystery. Visit www.LindaOJohnston.com.|||Justine Davis lives on Puget Sound in Washington State, watching big ships and the occasional submarine go by, and sharing the neighborhood with assorted wildlife, including a pair of bald eagles, deer, a bear or two, and a tailless raccoon. In the few hours when she's not planning, plotting, or writing her next book, her favorite things are photography, knitting her way through a huge yarn stash, and driving her restored 1967 Corvette roadster—top down, of course.|||Addison Fox is a lifelong romance reader, addicted to happy-ever-afters. She loves writing about romance as much as reading it. Addison lives in New York with an apartment full of books, a laptop that’s rarely out of sight and a wily beagle who keeps her running. You can find her at www.addisonfox.com, facebook.com/addisonfoxauthor or on Twitter (@addisonfox).